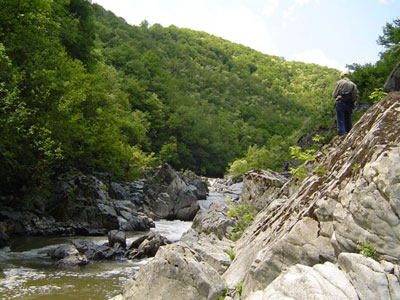 The topography of Strandja Nature Park is hilly and low-mountainous – with an average level above the sea of 200 m, but with a large horizontal segmentation that is typical for the high mountains in the country. The surface of the Park is highly dynamic – with rounded ridges, open sea shores, steep and gorge-like incised river valleys in places along the Veleka, Rezovska and Mladejka rivers, as well as densely branched hydrographic network.

Two main ridges are clearly discernible on the Bulgarian part of the mountain – the Rezovsko ridge, which continues from Turkey with the highest point –Goliamo Gradishte peak, and Bosnensko ridge, which starts from the border peak Kervansarai and ends to the south of the town of Tsarevo, with the dominating Goliam Papia massif (501 m a.s.l.). Other dominating peaks on the territory of the Park are Dryanovitsa  -684 m, Goliamata mogila – 603 m, Garvanitsa – 524 m, Sarnekovo – 520 m, Bosna – 453 m a.s.l. The northern border of the Nature Park passes along the Bosna hill. 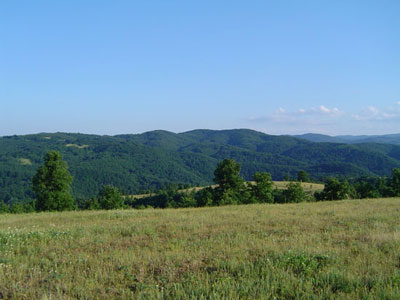 The karst type topography in the western part of Strandja – from Varovnik through Mladejko, Zvezdets, Brashlyan, Stoilovo and Malko Tarnovo, is determined mostly by the water-soluble properties of the carbonate rocks. The karst topography is manifested in various forms: karrens, whirpools, pot-holes, caverns and over 130 caves - different in size and complexity. Massifs and slopes of solid karst, rocky formations, rocky chasms and gorges defiles have been formed near Mladejko village and Dokuzak, Petrova Niva and Kovach.

The dominant volcanic ridge Papia – the highest peak in the Western Black Sea region, which was formed during the late Cretaceous period – and the picturesque geotopes along the coast of the Black sea: Veleka’s outflow and Silistar with their exceptional sandspits and fiord-like shores of volcanic origin, are geological phenomena on the seaside part of the Park. The scientific and aesthetic value of the coastal geological phenomena provides an opportunity for their open exhibition – a museum of paleovolcanology.