It is located 14 kilometers northwest of the town of Malko Tarnovo and 64 kilometers from the city of Burgas, 320 m a.s.l.

Old name: Surmashik. Its current name is its literal translation.

The village is nestled in a picturesque valley, overgrown with oak and beech forests. The mythic meadows, covered with dewy, and associated with the legend of its magical power at certain times of the year, are located in its surroundings. 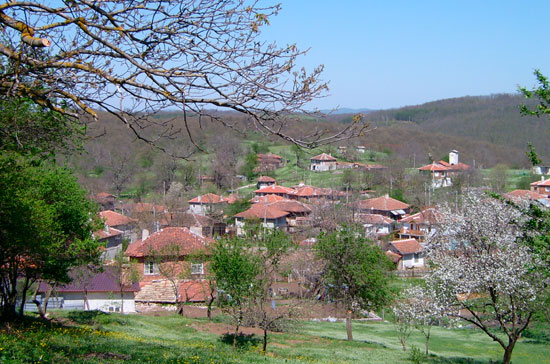 Upon arrival at the architectural reserve in Brashlyan village you will see that you have entered a very special place and that a truly unique walk in the past is yet to begin for you – narrow streets, which seem to resonate the steps of young women and men once walking on them, two-hundred-year-old rural houses listed as cultural monuments, an old church from the ХVІІІ century with a renovated monastery school. Listen to the story of its creation during the troubled years under Ottoman yoke. Explore the agricultural open-air museum, visit the ethnographic exhibit and definitely try to weave on a loom.

Marked tourist trails will lead you to some of the most beautiful spots in the surroundings of the village – to venerable trees, chapels, dolmens, mound necropolises or habitats of rare vegetal species, the wild orchids in the Gogovo area for example.

Shelters, which offer an excellent opportunity for recreation in the nature, have been built in the Two Vris, Boriloto, Kobarelovata watermill and St. Pantaleon areas. 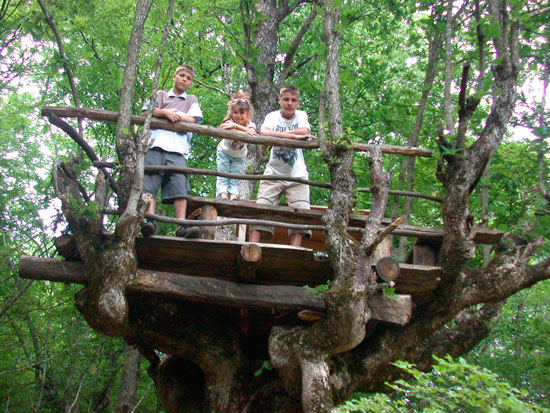 If you happen to be in Brashlyan on August 9, you will have the chance to celebrate with the locals the most important holiday for them – the day of the patron of their village – St. Pantaleon.

The place where the church was built in the end of the ХVІІ century has once been home to an ancient Thracian sanctuary. It is believed that it was dedicated to Dionysus – the god of fertility and wine.

The St. Dimiter Church is a typical representative of the local Renaissance religious architecture. It was declared a cultural monument in 1975, and an architectural monument of national importance in 1982. The unique bell from the first half of the nineteenth century, cast in the Jaroslavl city, Russia, can be seen even today.

The temple is sunken in the ground and in the past it was surrounded with a wall, about 2.5 meters high. The central internal space was sunken, in order to increase the internal expanse. An impressive design of the façade was sought for the outside, which was achieved through well-carved blocks of freestone. The open vestibule (narthex) with room for small school were added to the building in 1870.

A marble altar of Zues – Dionysus was built in the pulpit of the church, with inscription in ancient Greek language:

Of Zeus-Dionysus an altar I made here,

I, Lycomedes, son of Cross and the Great Priest of Bacchus,

For the great honor, through lot received, and for my children,

And for my initiates. Save them, please, blessed Dionysus!

Some scientists believe that the name of Zeus-Dionysus is denoting Dionysus as the supreme God – one of the names of the Son of the Great Mother Goddess. 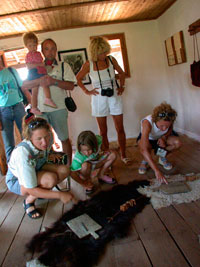 It is an architectural and cultural monument, located in the extension of the St. Dimitar Church. The school is founded in 1871, after Bulgaria achieved its ecclesiastical independence. In the first years of its existence it was providing education only to 12-13-year-old boys, who were mastering reading and writing in Bulgarian, and were chiming in to the priest during the divine services.

Today, the small room has been restored to that initial appearance when children had set not on desks, but on skins on the ground, and instead of blackboard, they had written with sticks on wax plates.

The 150-year old building has been preserved in its authentic form, both externally as well as when it comes to the internal structure of the rooms. In terms of architecture, it represents a revival two-storey house with stone ground floor and wooden floor. The museum showcases the everyday life and crafts in Brashlyan village from the second half of XIX century to the first half of XX century. The typical fireplace made of stone to the wall (chimney) is located in the large room on the second floor. In the past, the ground floor (dam) served as cattle-pen for the domestic animals. Nowadays, it has been turned into a crafts room, so that every visitor can see an authentic camp and try weaving. 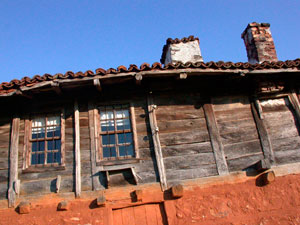 An architectural and historical monument, built in the XIX century. The plan of the house is typical for the residential architecture in Strandja. The ground floor is made of stone blocks with two wooden belts. The second residential floor is made entirely of wood. Two wooden stairs lead to it – one of them is located at the short end of the veranda, while the other is coming from the long side, from the offices in the back.

Balyuvata house was surrounded by а Turkish army on April 2, 1903. The first preobrazhentsi  - the voivode Pano Angelov and the rebel Nikola Ravashola – have died here.

Nowadays it is a private house, and during the summer you can enjoy folklore performances in its yard, part of an improvised “Ivy working-bee.” 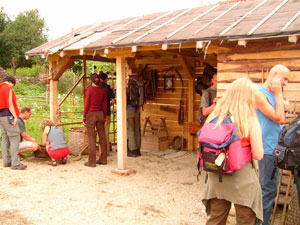 It is dedicated to the traditional agriculture of the Renaissance period. In a specially built shed and along the entire yard visitors can see old agricultural tools, used by the people in Strandja in the past: threshing-board (an instrument resembling sledge tool for threshing), stone mill for wheat, swaphook (a wooden instrument, which is pulled over the fingers of the hand during harvest), ploughshare (a tapered flat iron, which is fastened at the end of the ploughshare in order to dig deep into the soil), instruments for processing flax and hemp, you can even see a small apiary. You will hear words like “halomer”, “menitsa”, “burilo”, and you will see what they looked like and what they were used for. What would be more difficult to you, would be to imagine how the people of Strandja have managed to provide for their large families using these tools.

It is located 1 kilometer south of Brashlyan, along a tributary of Katun river. The chapel was completely restored in 1996.  Its holy spring is very popular as people believe it has healing properties.  The century-old trees around the chapel continue to impress visitors to this day.

A recreation area – shelter with tables, benches, and fireplace – has been built near the chapel.

It is located 2 kilometers east of Brashlyan village. You can reach the chapel through a marked tourist trail, which starts from the village and leads to Vujievo area. St. Petka is revered as a healer in this region, which is why the spring next to the chapel is attributed with healing properties. Particularly valuable, however, is considered not the water, but the yellow mud in the holy spring. The belief that it cures eczemas brings here people from all over Southeastern Bulgaria. An ancient ritual is being observed – before dabbing the affected area with healing mud, one should first tie a tread from  his/her clothes or handkerchief to the cornel-tree over the holy spring – as a gift. If a person doesn’t have anything to leave on the cornel-tree, he or she can throw a coin in the holy spring – to “buy off health.”.

In June, people gather together here and prepare boiled mutton to honor the holiday of the saint. They believe the holy spring has its own patron-animal – a span-long small golden grass-snake.

It is situated in the southern end of Brashlyan village. The chapels and the stolninas (small chapels) in honor of St. Marina in Strandja, are usually built near caves or rock crevices. The chapel in Brashlyan village, however, departs from this tradition, in order to fit in the oldest legend associated with the founding of the settlement: “In those ancient times, when there was no settlement here, its borders had to be delineated with a special ritual. Exactly at full moon, from sunset until first cock-crows, two twin brothers had to dig a circle with a plough, pulled by two twin oxen. At cockcrow the brothers still hadn’t closed the circle. Therefore, they erected a chapel over the place that wasn’t plowed till the end, and called it “St. Leftera” (according to the legend, St. Marina is a leftera, e.g. girl). To this very day, the residents of Brashlyan call it “The small church.”