The village is situated 12 km east from the main road Malko Tarnovo-Tsarevo, 17 km east of the town of Malko Tarnovo and 95 km from the city of Burgas; 300 meters above sea level.

Old name: Kladara – it was probably derived from the local word “Klada” – meaning a thick old tree trunk which the river has carried downstream and which at some narrow point of the river has become stuck between the two banks and created a natural bridge.

Population: 11 residents – the smallest village in the Strandja Mountain.

The village is situated amongst century-old forests in the mountain, above the picturesquely winding Rezovska river.

There are certain archeological proofs of the existence of this village that date back to Thracian times including necropolis, traces of metallurgical activities, remains of fortresses from Thracian and late ancient times, as well as the Thracian stone temples in Vatralova Poliana, which has chiseled circles with diameter of 10-15 cm. Most probably the temple served for the worship of the sun god Helios. There was gold working In the region of the village.  In some of the places where gold was worked glass vessels were discovered, on the bottoms of which there were traces of gold dust.

The village has existed in its present location since the 17th century. The preserved houses, which have typical 19th century Strandja Mountain architecture, make it a unique architectural site.

Because of the depopulation of the village (it is located behind the border facility), the buildings have been turning into ruins.

South from Slivarovo there is a picturesque view over the deeply cut ravine of the Rezovska river, which is the home of the Saponaria stranjensis. The meadows around the village are a place for rest and feeding for large flocks of storks during their migration season. 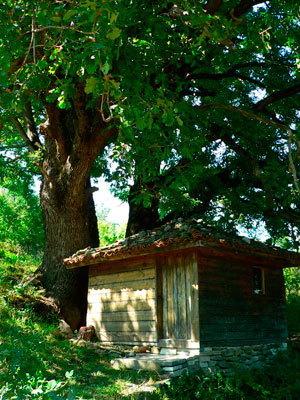 Some of the most interesting routes in Strandja start from Slivarovo – pilgrimages to the holy cave of St. Marina, to the birth place of fire-dancers – Goliamata Ayazma (The great holy spring) in Vlahov Dol, to the Thracian holy place of Indipasha.

No accommodation options are available in the village.

The village fair is on August 9, the Day of St. Pantaleon.

Visiting the village and its surroundings is possible after an ID check at the border facility.

The church was built in the 19th century on the foundation of an older church. It was planned to be a three chambered basilica with a women’s ward and an open entrance hall. From all the icons that were once drawn by iconographers from Tryavna, Lozengrad, and Strandja, only one can be seen in the church today.

The Thracian holy place of Indipasha 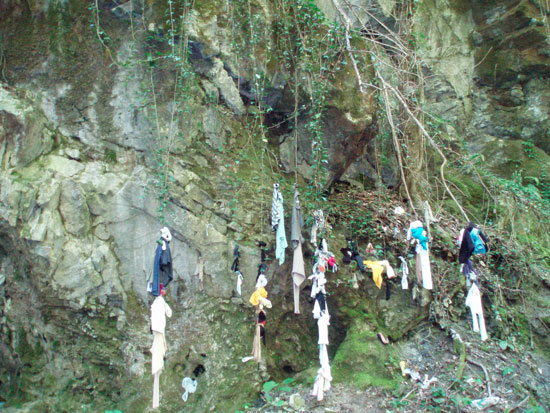 This ancient holy place is situated under a leaning rock and there is a fresh water spring (ayzmo) at the foot of the rock. It is in a deep dark heavily oak-forested ravine. The name is associated with pilgrimage and animal sacrifice on the 5th day after Easter – Pesah.  The place is visited by hundreds of people all year round who hope for healing through the practice of ancient rituals in which a major role is played by the healing power of the water.

The holy cave of St. Marina

The cave is situated about 12 km east of the village.

There is a unique fresh water spring located in the cave – the water which drips down the walls of the cave is collected in vessels and considered to have healing properties. This place was once considered the biggest cult center in southeastern Thrace, and attracted pilgrims from as far away as Istanbul. The people from the surrounding villages came to the cave to bathe in the healing waters. An ancient tradition is practiced in this cave: a metal, sometimes silver, representation of the ill body part or a whole body is left at the icon or at the eastern opening of the cave. It is believed that the illness will stay in the cave with the talisman.

The day of St. Marina (July 30 old style, July 17 new style) was once a big celebration for the young people who were of marriage age and was called the Unwed Fair.

The holy places of St. Marina are always a complex of a small monastery, a healing spring, a tree (or a few trees) on which the pilgrims tie a thread, a piece of clothing or a part of it with the hope that the illness that went through them will self-destruct and the person will go home healed.  These complexes are usually outside of villages or towns, in low hidden places like caves or deep ravines and the way to access them is a continuous descent.

The celebration of St. Marina is always at night. The pilgrims make their feasts around her caves and monasteries. They sleep around the cave with the hope of healing or prophetic dreams to direct them in what they should do in order to relieve their suffering.

After the construction of the border facility, the cave of St. Marina was left behind it and the pilgrims started to attend to the healing holy spring in the village of Gramatikovo.

There is another cave that is considered a holy place for St. Marina in Strandja and it is located near the village of Stoilovo.

In 2005, the pilgrimage to the holy cave of St. Marina on the July 30 (old style) is renewed by the residents of Slivarovo village and their descendants.